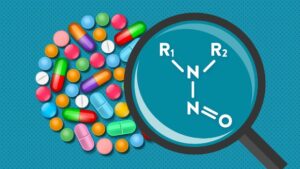 Nitrosamines (more correctly called N-nitrosamines) are derivatives of secondary aliphatic or aromatic amines, which have a nitroso (–NO) group attached to nitrogen. They are formed by the reaction of secondary amines with nitrite.  Volatile nitrosamines derived from low molecular weight alkyl or monocyclic secondary amines have been observed for many years in processed foods and beverages, cigarette smoke, and even at low concentrations in drinking water.

Why are nitrosamines a human health hazard?

Toxicity of a N-nitrosodimethylamine (NDMA) was first observed in mid-1950s when minks fed with nitrite-treated herring meal in a Norwegian farm were dying from malignant liver disease. The toxic agent was later identified as NDMA derived from secondary amines present naturally in the fish and nitrite.  Many later observations of NDMA toxicity have prompted carcinogenicity studies in animals. It is now firmly established that several nitrosamines are potent genotoxins, i.e. agents that may alter the genetic information of a living cell leading to development of cancer. Several nitrosamines have been classified as probable or possible human carcinogens, based on the evidence of carcinogenicity in a variety of nonclinical species and a small number of case-control human studies.

Recently, nitrosamine impurities have been found in commonly used drugs such as ranitidine, nizatidine, metformin and several angiotensin II receptor blockers. This has prompted FDA to develop guidelines for evaluating a risk of nitrosamines presence in any active pharmaceutical ingredient or drug product. The first guidance for industry was published in September 2020 and later amended in May 2021 (Control of Nitrosamine Impurities in Human Drugs | FDA). The guidance advises all drug manufacturers to conduct risk assessment of all chemically synthesized drugs and take appropriate actions to reduce or prevent the presence of nitrosamine impurities. This guidance applies to all chemically synthesized drugs on the market and those under current review by FDA. The risk assessments should be conducted using the concepts of quality risk management principles as outlined in ICH Q9. These important regulations are expected to rapidly evolve to limit human exposure to nitrosamines. 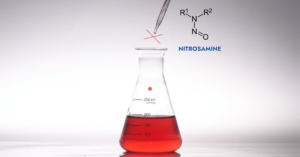 FDA has identified seven nitrosamine impurities that may be present in chemically synthesized APIs and drug products. The first five listed in table below have already been detected in drugs on the market, the last two have not been found so far, but their presence is highly probable. FDA has published interim acceptable limits for six common nitrosamine impurities (see table below). In the European Union, the European medicines Agency (EMA) established temporary interim limits for NDMA, NDEA, NMBA, NDIPA, and NEIPA for sartan products based on the maximum daily dose.

Why are nitrosamines present in drugs?

N-nitrosamines may arise when secondary amines react with nitrous acid. The latter is often used in chemical processes to quench residual azide or may be formed from nitrite salts under acidic conditions. Nitrites may be carried as impurities over several steps in the process. Amines may be introduced as reagents, catalysts, or as impurities in raw materials. Amines may also form from amide solvents, such as for example dimethylformamide, when heated to high temperatures. 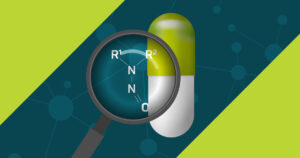 What about impurities arising from nitrosation of the amine-containing drugs?

Although not specifically discussed in the FDA guidance, nitrosamines may form in a reaction of a drug containing a secondary amine functional group with a nitrosating agent. It may happen during the synthesis process or in a formulated product since excipients may be contaminated with nitrosating agents. Therefore, control measures must be implemented to detect these impurities. 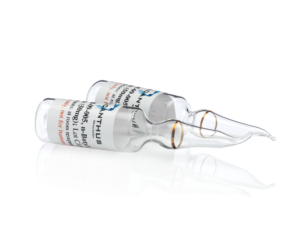 Anticipating a growing need for nitrosamine reference standards, we are regularly adding new products to our catalog. If you do not find your product in our catalog, please contact us with your specific needs.

GET UPDATES FROM ACANTHUS RESEARCH